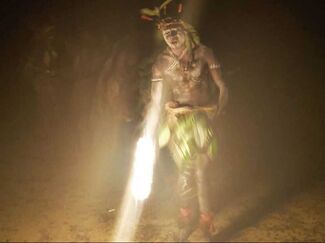 It has been said, the union of nature and soul removes the veil of ignorance that covers an intelligence. Within the Bwiti tradition, Iboga brings this union, lifts the veil of ignorance and shows the self that it is empowered, that all is choice and the individuals truth only. The showing by the root, returns the self to its union, in recognition of its inextricably interfaced relationship to the soul, where all abilities exist, where all knowledge resides and the only truth dwells.

​We are offering a 7 day, 6 night Iboga retreat in southern Costa Rica. Our retreats are completely orientated around traditional Missoko Bwiti protocols. The tradition of the Bwiti needs to be present for the healing to be deepened . The ancestral spirits and people´s of Bwiti emblaze and amplify the connection to the root.

Bwiti is the study of life! During our ceremonies you will receive Iboga root bark that has been traditionally prepared by the Missoko Bwiti people. It is the inner bark of the root of the Tabernanthe Iboga tree. Traditionally prepared bark preserves the spirit of Iboga. The emancipation during the symbiosis with Iboga is the zero point, the ever new beginning, the eternal fresh start, clean slate, free of time based traumas and illusion. Iboga is the gift from the Gods. A training tool when used in tradition. The tradition provides guidance and knowledge to allow the individual to begin a journey of total choice. We are returned to the deep cellular knowledge that resides within all of us. We are blessed to be supported by the unimaginable. almost unthinkable, sacred knowledge of the Bwiti - its ancestors, its legacy in those  to provide an opportunity to individuals to take ownership of their self, to learn with support, to be watched over, loved and supported in your journey to become one again. Bassé!